New technology is improving situational awareness for police officers and other first responders by minimizing response times and streamlining data sharing among agencies.

Advancements in high-tech for first responders might be essential in keeping police, firefighters, and EMTs on the job. Almost half (44%) of first responders surveyed said they considered leaving their jobs due to work-related stressors.

Being a first responder is not an easy job, noted Matt Polega, co-founder and head of external affairs at Mark43, who developed a public safety software platform allowing agencies to manage, share, collect, and analyze information more efficiently.

Solving such problems related to job stress and safety concerns is a common element driving some high-tech companies to focus on the needs of workers patrolling the streets on the domestic front lines. Public safety technology is not a one-size-fits-all proposition. Often it overlaps. Sometimes, it drastically innovates.

In this article, we continue discussing the role technology plays in efforts by software developers and hardware makers to assist those agencies that serve public safety. One such company is Mark43, which designed a line of software solutions that run on desktop and laptop computers as well as squad car-based computer terminals. 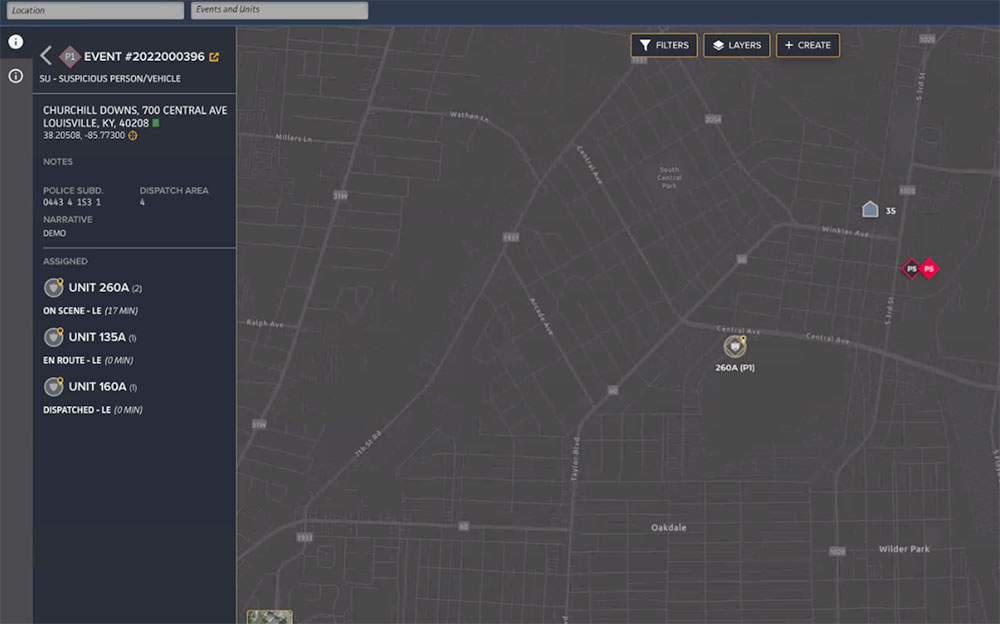 New technology such as the Mark43 communications platform enables real-time views on squad car screens so responding units can be better informed of event scenes before they arrive, improving their safety and efficiency. (Image Credit: Mark43)

The company’s Mark43 lineup options are entirely cloud-based, which minimizes staff training because the applications run in a variety of web browsers. The result is a much less costly, and technically easier upgrade path to successfully transitioning to high-tech, stress-free. The only new cost is the cloud-delivery subscription, which varies.

“Cloud native is something that Mark43 hangs its hat on. That means our application is built to live in the cloud. The things that power the cloud power Mark43,” Polega told TechNewsWorld.

In Marvel’s “Iron Man 3” movie, the hero called his new battle attire the Mark 42. It was the forty-second version of the crimefighting exoskeleton he built. Polega and his two other co-founders — Scott Crouch (also CEO) and Florian Mayr (also vice president) — named their new company Mark43 in honor of its next-generation crimefighting gear.

The trio met and started working together a decade ago as Harvard University juniors pursuing either mechanical or electrical engineering degrees. Their job in a particular class was to work with a client on an engineering project.

Harvard was very interested in developing engineers that were not only focused on why heat exchangers work and how bridges bend. The focus was also on helping them understand that someday they would have to work with people to solve their problems. They have been doing that ever since, quipped Polega.

That third-year class project involved something other than figuring out kinetic operations and physically breaking down structures. The job entailed working with the Massachusetts State Police special operations team that had spent time serving in a military capacity in the Middle East. That led the state police team to an aha moment. Domestic violent gang members behaved very much like insurgents in the Middle East.

Their quandary was about how to bring all the counter-insurgency tactics from the battlefield to combat domestic gangs and gang violence. Polega and company dug in to do just that. The tasks involved getting people comfortable with calling the police, cleaning up graffiti, or reducing open-air drug dealings.

“The state police were rolling out this new policing model, and our job in this crazy engineering class was to assess if this policing model was effective or not effective. Fast forward 10 years later, you realize that three juniors with engineering degrees that had no idea about policing or complex socioeconomics,” recalled Polega.

They learned to do all of those non-academic things and use engineering principles to solve those barriers. It was a much bigger project than the three wannabe engineers anticipated.

The project prepared the three students to see that all of the software they were using was not like the wizardry found in TV shows, the likes of NCIS, CSI, and any of the other cool Hollywood TV shows using “stage” technology. Their professor gave them a goal — try to build something to help out the state police somehow.

The trio worked on that for the rest of their junior and senior years. After graduating in 2014, they went to the Washington D.C. Metropolitan Police Department, where they met a similar challenge. The police officials said: We don’t really know what you guys do, but we have some problems; and they said: we don’t really know what your problems are, but we can show you some of our solutions.

“We started to really understand all this analytical stuff and all these business intelligence tools. They were cool, and everybody wanted to build them, sell them, and get them into police agencies. But the real problem was collecting the data and capturing the information in a way it can be consumed online for all the important things police officers need to do if that information goes to court,” explained Polega. 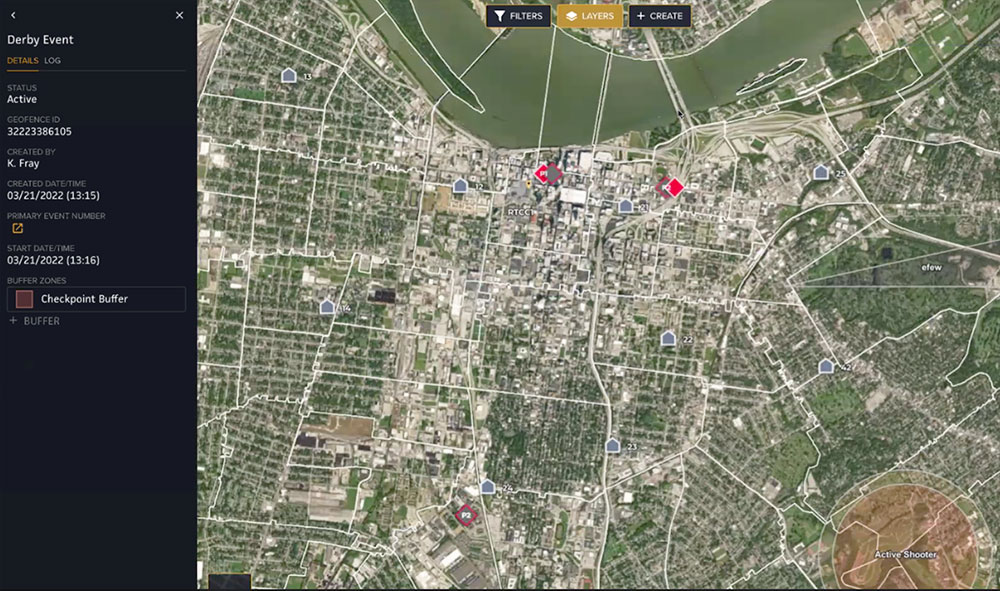 Their encounters with police departments and other first responder agencies further taught them the scope of the job performance the software they built had to arrest. For instance, when dispatched, police officers have to write reports about anything they encounter in the field and the kind of incident to which they respond.

Those reports had to be completed and submitted from computer terminals back at headquarters. Doing that on a daily basis took officers off the streets where they were no longer protecting and serving.

The burden of constantly preparing reports for incidents, accidents, confrontations, and court records drastically reduced the manpower available to respond to calls for many of their assigned shifts.

The dynamic trio of engineers solved that problem. After Polega, Crouch, and Mayr finished their work for the Washington D.C. Police Department in August 2015, they launched the company’s first product, a records management system.

It was the precursor of the Mark43 they later developed. This earlier model of the records management system handled the collection of on-duty arrest and traffic collision reports. It was a real operational system in place before Mark43 was fully designed, Polega noted. 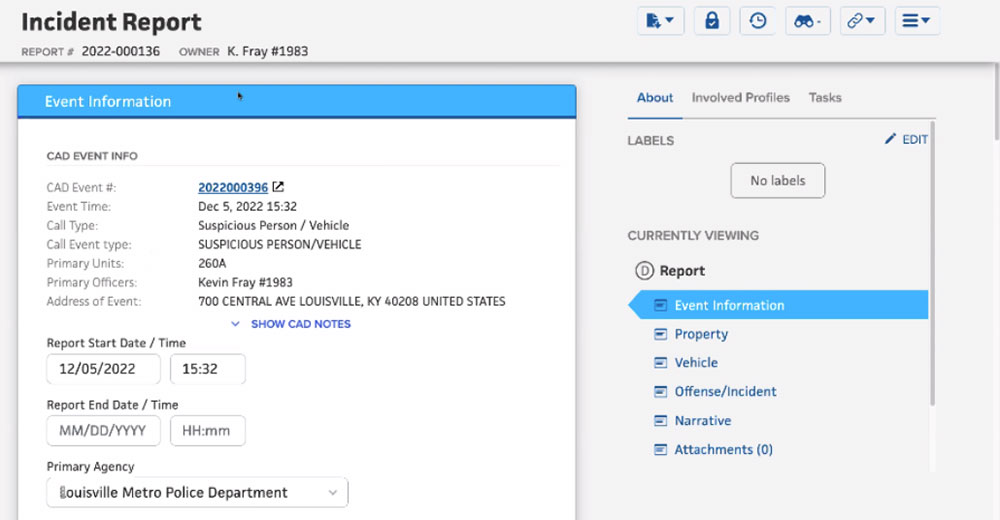 An outgrowth of the three young engineers’ work with the Washington, D.C. Metropolitan Police Department led to the development of in-vehicle software that integrates with computers in HQ. (Image Credit: Mark43)

“I hate to call it TurboTax for police reports. But that is actually a pretty apt description,” said Polega. “We left Washington, D.C. having improved that agency’s arrest reporting times by 80% and offense reporting times by about 50%.”

Another much-needed result was the department’s ultimately adding 110 police officers back to the force, which is the equivalent of 240,000 person-hours back-to-back to the agency annually.

If you have ever observed a modern-day emergency call center or viewed TV police reality shows, you are familiar with a command center staffed with multiple dispatchers. Each one sits in front of numerous large-screen monitors.

That high-tech concept is somewhat like what many large first responder organizations have in their regional dispatch centers. Smaller agencies operate scaled-down versions of that scenario.

The online demonstration Kevin Fray, director of solutions architecture at Mark43, demonstrated showed off the power and operating ease the Mark43 system brought to patrol officers in their vehicles and their call centers. Writing reports and instantly accessing updated video data from dispatchers is a significant game changer for first responders. 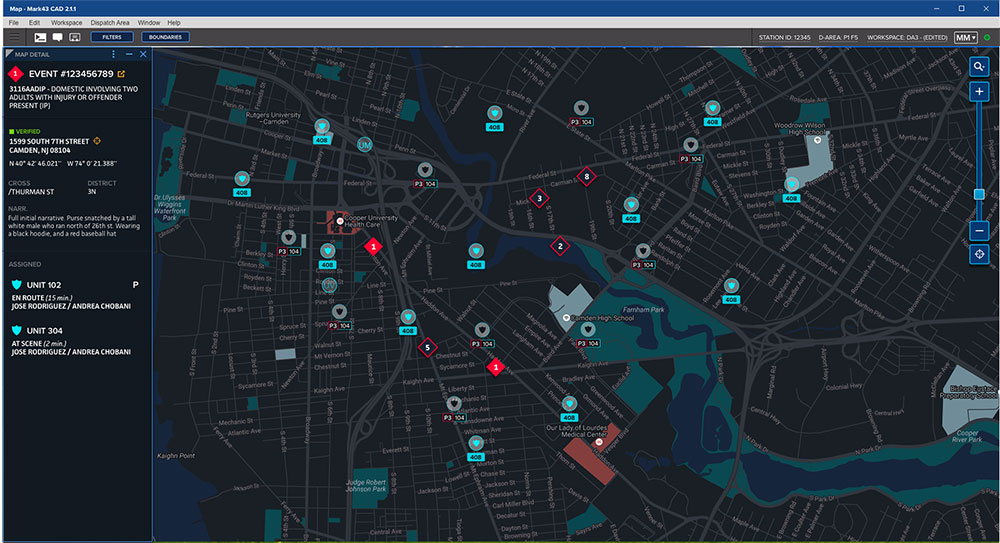 Police dispatchers miles away at a central communication center use a variety of large-screen displays to oversee police and emergency response units in real time. (Image Credit: Mark43)

During our Zoom call screen-share, Fray displayed reports, area maps, aerial views, and much more on multiple call center monitors that showed what dispatchers would see at their workstations and the officer’s view in the patrol car. Similar to using automobile navigational apps and multitasking, Fray showed how the Mark43 navigation worked with Alt-Tab keys and touch screen to change the screen displays.

“I am [using] modern browsers — Google Chrome, Microsoft Edge, Safari. So from an end-user perspective, and just think about this from a technology perspective, you do not need to go out and buy a bunch of computers or anything as long as you have your typical standard desktop, or even laptops, and have access to the internet,” Fray told TechNewsWorld.

One of the main assets of this innovative communications platform, noted Fray, is the ability to put the mapping power in the dispatchers’ hands. The system is capable of displaying many kinds of data layers. Responders to an emergency can see live views of traffic, accidents, active shooter locations, and even views of crime locations while en route. 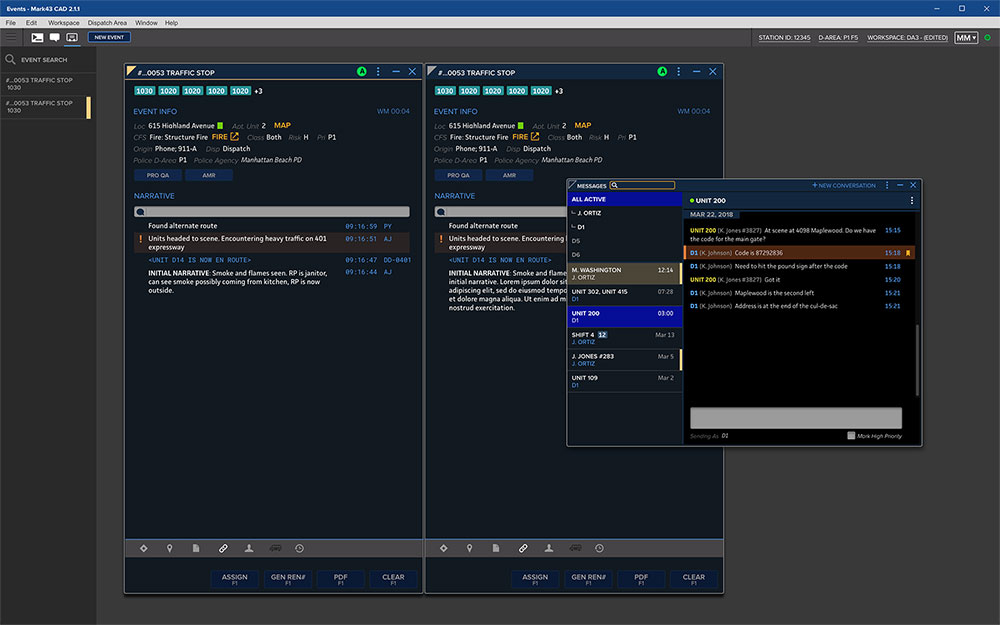 Another display enables dispatchers to keep in constant touch with first responders in real time and instantly shepherd updated information to wherever it is needed. (Image Credit: Mark43)

Another Mark43 benefit is its resilience to sharing information. The system has a reliable workflow that lets officers automate much of the report-writing tasks and enter information on-the-fly while remaining on patrol. Many older products require additional data stitching when officers get back to headquarters and try to integrate content written on the patrol car’s mobile computers.

Often, data collection needs to be changed, Fray added, but the in-car and in-station entry fields are not always compatible. Those two products will not work very well together, especially if different vendors maintain them.