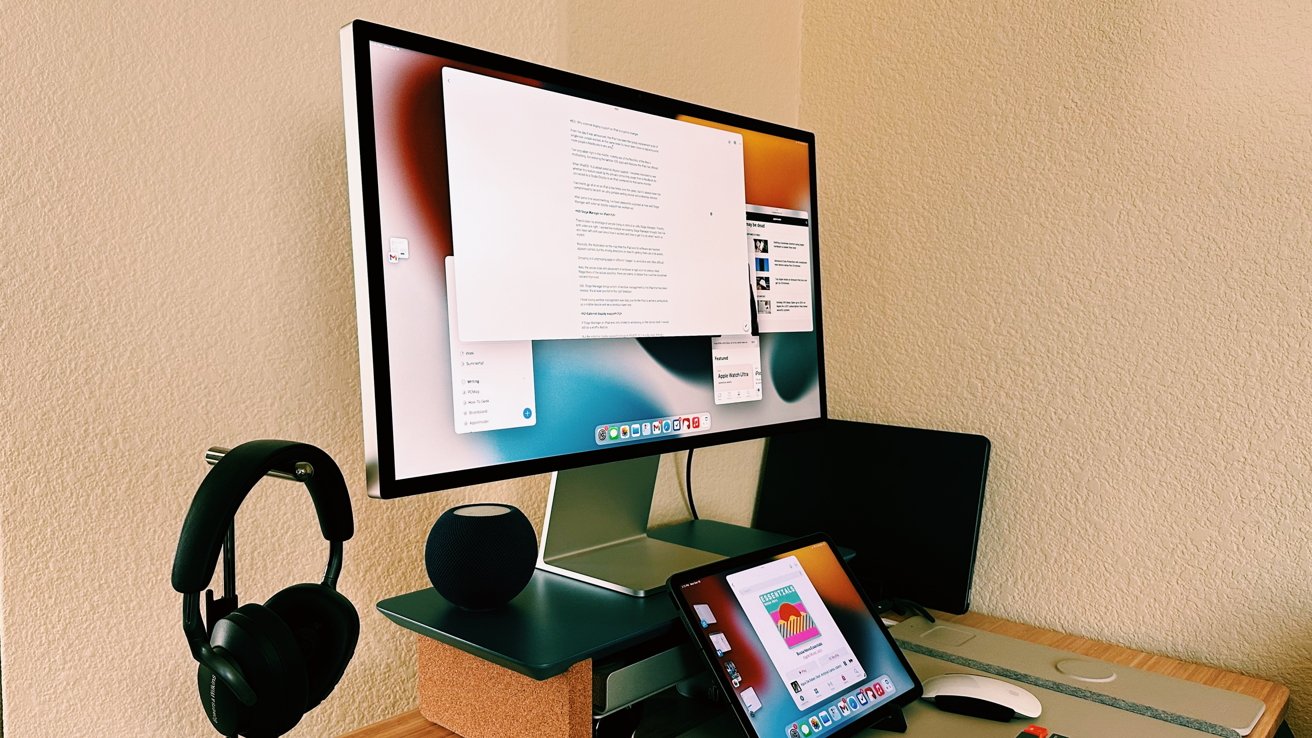 AppleInsider may earn an affiliate commission on purchases made through links on our site.

Enhanced external display support for iPads is here, except Apple made it exclusive to M-series iPads. We explore whether it’s worth upgrading from an older model to benefit from the new feature.

When iPadOS 16.2 received external display support for devices with M-series processors, it was an intriguing prospect. I became interested in seeing whether this feature could tip my primary computing usage from a MacBook Air connected to a Studio Display to an iPad connected to that same monitor.

The problem, however, was that I only had a second-generation 11-inch iPad Pro with an A12Z Bionic chip. It’s been so capable that I hadn’t been tempted to upgrade — until now.

Upgrading from an older iPad Air feels like an easy decision. Even upgrading from a 2017 iPad Pro with a home button isn’t a tough choice.

Upgrading from a 2018 or 2020 iPad Pro on the other hand is less straightforward. Unless there is a specific hardware feature you need in newer models, those similar-but-slightly-different 11-inch iPad Pros of old are still great tablets.

Trying to compare the line of 2022 iPads also isn’t exactly straightforward or easy. There’s an iPad for everyone, and if you fall into an area of overlap, prepare to go crazy trying to figure out which way to go.

I decided to go with an open-box 2022 iPad Air to gain access to external display support. I desperately wanted to keep Face ID and ProMotion, but it felt like a steep price to pay for a single feature.

Luckily, the newest iPad Air works with the Magic Keyboard and Apple Pencil 2 I already own. Nearly all my existing accessories still worked too.

Was it worth it?

I’ve tried to go all in on an iPad a few times over the years, but it’s always been too compromised to be both an ultra-portable writing device and a desktop solution.

In short: yes, pivoting to an iPad Air with M1 has been worth it so far.

The external display support in iPadOS 16.2 is a big deal. It finally unlocks the feeling that “big work” is possible.

I’ve done real work on the iPad for years, but I don’t feel like I’ve been able to work at a larger scale that encompasses my whole workflow. I was finally able to write, edit, upload images, and publish through a web-based content management system on an iPad thanks to this new monitor support.

While Stage Manager used on an iPad alone allows for movement between multiple windows, it still felt cramped and uncomfortable for certain tasks.

Personally, I just couldn’t complete my entire workflow with previous iPadOS software on an 11-inch screen — my preferred tablet size. But doing the same tasks with an iPad connected to a Studio Display has felt much closer to achieving a desktop experience than ever before.

I’ve enjoyed using multiple apps stretched out on a Studio Display while still having the iPad screen glowing at me that I can use for other apps that provide glanceable information.

Of course, as much as I’ve loved it so far, external display support, like Stage Manager itself, is far from perfect on this first iteration. It has already crashed once during a task, which isn’t ideal.

Still, this external monitor feature feels like a historically huge first step toward the future.

Who should upgrade to an M-series iPad?

The new external display support is critical to anyone trying to live the iPad-only lifestyle. If you’ve dreamed of taking your iPad on the road with only a keyboard case and docking it while back at home, consider buying a newer Apple tablet.

However, if you know there are certain holes in the apps you need to accomplish all your work, you should probably hold off from going all in on a new iPad just for this single feature.

Working exclusively on an iPad is mostly a pleasant experience, but there are still enough rough edges in how Stage Manager works (or doesn’t work) that you’ll regret your decision.

Here’s to hoping Stage Manager is smoothed out and refined over the next few years.

The biggest disappointment about Stage Manager with external display support on the iPad is that it took so long to get here.

Frankly, the MacBook Air got so light, thin, and powerful before I could fully commit to an iPad.

The MacBook Air with M2 makes both the 12.9 iPad Pro and other larger iPad models that support Magic Keyboard cases feel a little heavier and bulkier than before it arrived. At the very least, carrying a new MacBook Air and an iPad with a keyboard in a backpack while traveling is much harder to justify.

External display support on an iPad is compelling, especially for anyone who has ever flirted with going all in on Apple’s tablet as their only computing device.

For some people, it literally could be the single feature to push a potential owner over the edge in pursuing an iPad-only lifestyle. In my case, it got me to side-grade to a newer iPad.